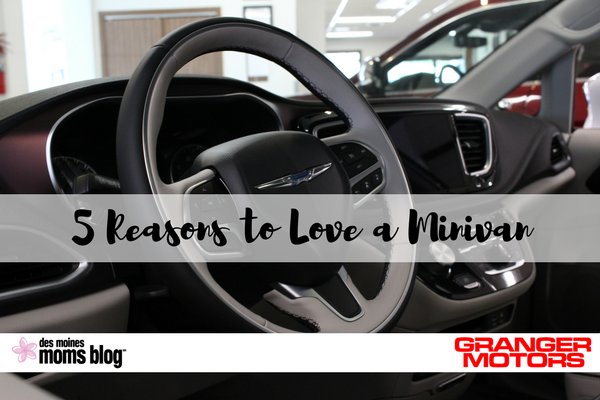 Minivans get a bad rap compared to their seemingly cooler cousin, the SUV. But when you have lots of littles in tow, a minivan is a dream.

We’re setting out to answer the question: Who wins in the battle of minivan vs. SUV?

Here’s what you need to know about the perks of driving a swagger wagon – er, van.

5 Benefits to Being a Minivan Mom

1. Minivans save on gas.

2. Minivans have more seating than SUVs.

Minivans are made to haul people — SUVs are made to haul stuff. A family of seven can easily fit in a minivan with space for everyone, but in an SUV, third-row seating is often treated as an afterthought, resulting in cramped, unhappy passengers. Some minivans even offer seating for eight passengers.

As moms, storage is music to our ears — and minivans have a ton of it. Most modern minivans offer lay-flat seats and compartments to stash and go. Compared to SUVs, many modern minivans boast more cargo volume.

A new Chevrolet Tahoe only has 15.3 cubic feet of cargo volume — the new Chrysler Pacifica has almost double that at 32.3 cubic feet. (And, the gap gets even bigger when you fold the seats down: The Pacifica offers a whopping 140.5 cubic feet! You can haul some serious stuff in there!)

Choosing a minivan for your family is a budget-friendly vehicle option. Compared with an SUV, a minivan typically has better options and lower starting prices. A mid-range Chrysler Pacifica starts at around $34,000 — a similarly-optioned Chevrolet Tahoe starts at nearly $54,000.

No mom wants to gamble with safety. While vehicles have been getting safer and safer throughout the years, some are still better choices than other. Minivans routinely achieve five-star ratings from the National Highway Traffic Safety Administration. Most brand-new SUVs get four out of five stars. Minivans are made to keep you and your family safe. SUVs are made to drive over rocks — what would you like your car built for?

Next time your family is looking to purchase a new vehicle, put a minivan on the list! Are you a minivan mom? Granger Motors is a family-owned business and part of the Iowa Auto Dealers Association. An Italian family started the business in 1918. Granger Motors has been located in Granger for close to 100 years. From its humble beginnings, it has grown to serve most of the Des Moines area as well as customers outside of the state of Iowa. Granger Motors does not ever want to become the biggest Dodge, Jeep, Ram, Chrysler, or Ford dealership out there, but they would like to be known as the best. That is their goal and they hope you benefit from the Granger Motors Difference!

A team of professional, fun, and friendly employees is the secret to Granger Motor’s success. Their dealership is different in that their employees enjoy a long average tenure at the dealership and enjoy working in a family environment. The passion and dedication that each employee invests is a vital part of the overall dealership success and what keeps our loyal customers coming back.