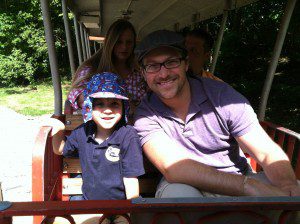 With Father’s Day approaching, I can’t help but think about the fathers in my life.  I have been blessed with an amazing father, who has loved me unconditionally and shown more generosity than I could ever repay.  However, my definition of a father changed the moment I became a mother.

It was Father’s Day weekend six years ago when I found out that I was pregnant with our first child.  My husband and I had gotten married nine months earlier and had planned to ‘wait a couple of years to have kids and focus on each other and our careers’.  God obviously had other plans.
After realizing my cycle was two weeks late, I stopped at the pharmacy after work to grab a pregnancy test, it was positive, immediately, but I didn’t believe it, so I took a second test.  It too was positive immediately, but, still in denial, I drove to a third pharmacy to get a digital test, and only when I saw the words ‘positive’, was I convinced I was going to have a baby.
I went back to the pharmacy for the fourth time, this time for a Father’s Day card for my husband.  It seemed to be a creative way to share the happy news with him…I was going to give him the card on Father’s Day to announce that his very own Husker Fan was coming in February ’09.  He and one of our friends had been at the College World Series in Omaha the day I took the tests, and he didn’t get home until late in the evening.  So, the next morning we got up and I set the card on the counter with my husband’s name on it.
Two hours later, the card was still sitting in the same place I had left it, the anticipation was driving me crazy.  I went to get ready for the day and when I came up, I immediately looked for the card, which had obviously been opened and read.  I looked over to my husband and asked what he thought about the card…to which he replied ‘Why did you get me a Father’s Day card?”  It was obvious that he didn’t get the clue, or he was in denial.  In reality, the latter was true.  When I explained to him that he was going to be a dad, he kindly told me to ‘give him some time to process’ and he went outside to read.
The next morning, my husband came to me and told me how excited he was to be a dad and asked what we needed to do next.  We chose our midwife, developed our birth plan, and eight months later, our son was born.  I had never felt so loved and empowered as I did that day as my husband supported and encouraged me through labor and delivery.  But, the most incredible part of that day, was when my husband saw our son for the first time and I could see the pride and love like I had never witnessed before.
My husband provides for our family in a million ways, and he offers a different perspective than I can. Over the years, it has become obvious how different our parenting styles can be.  He finds pride in teaching our son how to hang from the ceiling fan at a young age, boasting of his strength, and laughing at the sass of our one and a half year old daughter, which I fear may be just the thing that drives him crazy in her teenage years.
The lesson I have learned through all of this…in those moments where I want to question the actions of my husband doing things I ‘would never do’, I stand back and am thankful for the relationship that my husband has with our children and the memories and joy he is imparting on them.  I think before I speak, and take time to praise him for making the effort to spend time with them and play with them, every day.  Nothing brings me more joy than seeing him interact with our kids, hearing them laugh together and seeing them playing so intently with one another.  When I became a mother, my husband became a father, and my love for him grew deeper than I ever thought possible.