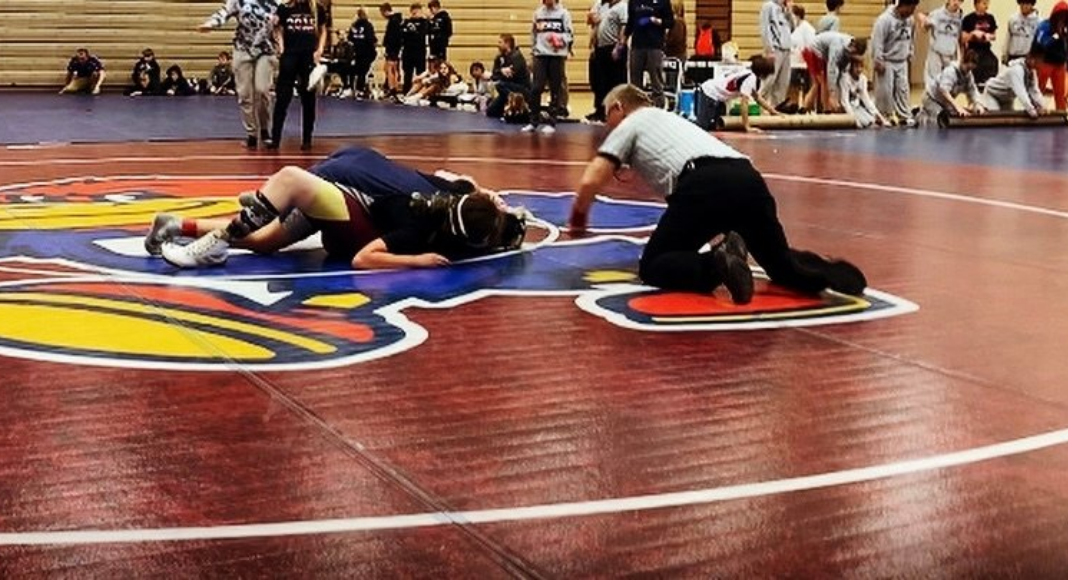 My name is Mary, and I am a wrestling mom. I should clarify to add that I am a girl wrestler mom. I know, I didn’t see it coming either. Here’s how it happened and what I learned along the way.

I was driving my daughter home from her last cross country meet of this season this fall praising her for successfully reducing her time at each meet, while simultaneously thinking about the practice free time we would have until basketball started when she hit me with a real whopper. This is a very accurate transcript of our conversation including my thoughts:

Her: Mom, I think I want to go out for wrestling. There is a meeting about it tomorrow.

I thought: Wrestling? Wrestling? Gross. OK, so how can I best respond…

Me: Wrestling huh? What do you know about skin infections?

Me: Yeah, skin infections, you know like ringworm and…other ones. And other people’s sweat and stuff…

Her: OK…can I go to the meeting?

I thought: OK, but once you figure out how gross it is you will be out

Me: Of course you can

I really said that. My first instinct was to tell her the reasons I wouldn’t want to wrestle, which were the same reasons I didn’t want her to either.

You may have read my post about being a Skater Mom or how I let her dye her hair blue so clearly I try to let my daughter express herself and be who she wants to be. But wrestling was a tough one for me to accept, at first.

I would be betraying myself and how I mother by trying to get her to not do something just because I found it gross. Once I thought about it, I decided she would be a really good wrestler. And she was (until her shoulder got dislocated, but that’s a post for another day).

She came home the next day really excited about wrestling along with questions about how I knew so much about skin infections because skin infection prevention and treatment was a large part of the meeting. The few days before the first practice became a blur of after-work shopping for shoes, mouth guards, antibacterial shampoo and soap, and compression wear. She was geared up and ready the night before practice.

Her first win, at her first meet, was amazing even if I had no idea what was going on. Who was this 7th-grade powerhouse who was able to go toe-to-toe with girl and boy opponents? Who was this girl who would lift weights at home after over two hours of practice every night? She was determined to be her best and learn from each win and each loss.

The Evolution of a Wrestling Mom

To be clear, prior to this fall I knew precious little about wrestling that I didn’t learn from WWF as a child in the 1980s. So basically I was starting with zero knowledge. Fast forward a few meets and I was a true wrestling mom.

I was getting to her eye level because she would look to me during her matches for reassurance. Yelling words of encouragement with her friends in the stands. Telling her to shake off her first bloody lip. I was chatting it up with the other wrestling moms and cheering on every single kid as they wrestled.

My daughter was lucky to have four other girls on her middle school team so they were able to bond over their shared experience and they were each other’s loudest supporters. I was proud to point out my daughter as other spectators asked me which one was my son.

As with any sport, some of the losses were close, or maybe because of what we perceived as a bad call and those were especially disappointing. There were many times she was mocked by a male opponent before or after a match. Some even tried to refuse to shake her hand. That was especially difficult for her but she never let it stop her from congratulating them kindly anyway.

Once after a snub I could clearly see from the bleachers, I asked her why she kept trying when her opponent clearly didn’t respect her. Her response, which was something like this, astounded me “Because Mom, I deserve to be here as much as he does. I know it will take some boys time to accept that girls can wrestle them too.”  At that moment, I realized she was giving her opponents the type of grace I would have been hard-pressed to find in myself to give.

So, in conclusion, wrestling is a sweaty, bloody, smelly, full-contact sport. The risk of injury (and skin infections is high). My water bill went up to due increased showers and wrestling-only loads of laundry. I saw far less of her than I would have liked. But I wouldn’t trade it for the world. I can’t wait for her shoulder to heal so she can get back on the mat. I am a wrestling mom. Summer Festivals Happening In + Around Des Moines in 2022 I Love Being a Baseball Mom