Are your kids in sports? Chances are, the answer is yes. As a parent, are you a good fan? Sadly, many parents and adults, are NOT good fans.

When I first read the article my first thought was, “Kudos to them for publishing this. It needs to be said.” My second thought was, “How embarrassing for us that they had to.”

Here are some snippets from the article and my encouragement on how to be a part of the solution, and not the problem.

If you have access to social media or YouTube you know this is true. There are hundreds, if not thousands, of videos of parents losing their ever-loving minds at sporting events. And not just at the high school level.

When more than 2,000 high school athletic directors were asked in a recent national survey what they like least about their job, 62.3 percent said it was, “dealing with aggressive parents and adult fans.”

When you consider how many hours activities directors spend scheduling, hiring officials, lining up volunteers, and attending events, this statistic is alarming. They could have said cited so many things as the worst part of their job. Nope, the worst part is the parents and adult fans. Wow.

How to be a good fan:

If you are a parent attending a high school athletic event this fall, you can help by following these six guidelines:

You are, after all, an adult. Act in a way that makes your family and school proud.

Doesn’t this sound like something a coach would say to his players? But, no. Apparently, parents need the reminder. It’s clearly needed when earlier this summer a brawl broke out in Colorado at a baseball game for seven-year-olds (SEVEN!) because an umpire asked the parents to pipe down due to the inappropriate language they were using.

Let this sink in for a minute. Adult fans, at an activity for 1st graders, are dropping f-bombs!

The umpire asked both sets of fans to rein it in and a brawl ensued. Keep in mind, the umpire himself was only 13! The umpire is quoted as saying, “I shouldn’t have to tell a grown man how to act around little kids.” Exactly. He shouldn’t. And neither should an athletic association have to send out this letter to parents. And yet, here we are.

2. Don’t live vicariously through your children.

High school sports are for them, not you. Your family’s reputation is not determined by how well your children perform on the field of play.

Oh man, I see this all the time and, admittedly, can fall into the trap myself. It’s so easy to fall into a habit of using pronouns like “we,” “our” and “us” when referring to my kids and their activities. “We won by 30.” “Our team is really playing well.” No, it’s not my team. It’s my kid’s. His team. Her choir. You get the picture, but wow, I fall into this one easily.

I see a lot of parents trying to live through their kids. They didn’t get to play sports or start on varsity or have the lead in the school play, so they’re going to do everything in their power to position their kids to be the star that they never were. It results in pushing kids younger and younger to play at a high level. No wonder parents are invested and begin using the “we” pronouns. They have spent a lot of time and money on this kid’s activity and – whether they can admit this to themselves or not – they want their payoff.

You would think the adults who actually WERE good themselves would be more relaxed, right? They would know that starting or starring or being the best is great, but doesn’t last and doesn’t fulfill you. Eventually, the playing career ends and life goes on. This truth should help put the activity into perspective resulting in those parents chilling out enough to cheer positively and have fun.

But, that’s not always the case. Last winter I was at a high school basketball game and behind me, in the stands, I was distracted by the yelling of a mom and dad from the opposing team. Their yelling was so loud and so negative I may have even turned back with a shaming, “Seriously? Come on. You’re embarrassing daughter and yourself. This is a high school basketball game. It’s no big deal. Relax!” kind of look.

And then I noticed that the people doing all of this criticizing and yelling where a former professional baseball player and his wife. I was shocked. I’d always heard good things about this player and he’s certainly done amazing charity work in his hometown, but I was saddened and disappointed. I would have thought that a guy who spent 16 years in professional baseball would know better. I guess not.

3. Let your children talk to the coach instead of doing it for them.

High school athletes learn how to become more confident, independent and capable—but only when their parents don’t jump in and solve their problems for them.

Sign of the times we’re living in with helicopter parenting. I try to force my kids to make the call, have the conversation, send the email or the text to their coaches. But, I know I’m guilty of overstepping. A few weeks ago at school open house, I jumped in to ask my daughter’s advisory teacher a question before she was able to ask. She chided me in the hall saying, “I was going to ask that, but you beat me to it.” Ugh, lesson learned: let them handle it.

One of my son’s basketball coaches last year held a pre-season parent meeting and informed all the parents that he would not respond to any parent’s call, email, or question regarding playing time. He would talk with the players only. Bravo, coach!

No coaching or officiating from the sidelines. Your role is to be a responsible, supportive parent, not a coach or official.

Always tough, especially if you’re a former player or fan of the game. There’s a t-shirt company in our city who recently released a shirt that says, “This is my officiating from the stands shirt.” It’s funny because it’s true.

I don’t know why we yell at the refs or the players. They can’t really hear us. Do you think my son is going to hear me yell from the stands to put his hands up? No. I think it’s my little way of trying to control the outcome of the game. (To be clear, my criticism of the officials has not yet once affected a game’s outcome.)

This is where sports can take a lesson from the fine arts. Could you imagine yelling out suggestions or critique in the middle of a band concert?

“Director, why did you choose that selection of music? Why not this option instead?” “The acoustics are all wrong. I can’t believe this!”

5. Remember: Participating in a high school sport is not about a college scholarship.

According to the NCAA, only about 2% of all high school athletes are awarded a sports scholarship, and the average total value of that scholarship is only around $18,000.

We are in the height of parents paying all kinds of $ for their kid to be the best and with what goal in mind? To earn a college scholarship. So, parents spend thousands of dollars in camps, coaching, and travel for their sons or daughters to get exposure on the chance they could get a scholarship to pay for their college…of which 2% (I’ve heard <1% for Div. 1) will get a scholarship.

The irony is, if they took those thousands of dollars and put them in a saving account, they would have more than enough $ to pay for college and then some.

One last thought on trying to earn your kids a college scholarship: Because they’ve been competing at such a high level since they were in 1st grade, by the time they reach that goal of a college scholarship, many athletes are burned out and, consequently, quit during or after their freshman season.

6. Make sure your children know you love watching them play.

Do not critique your child’s performance on the car ride home. Participating in high school sports is about character development, learning, and having fun—not winning and losing.

Purchasing a ticket to a high school sporting event does not give you the right to be rude, disrespectful, or verbally abusive.

Cheer loud and be proud, but please also be responsible and considerate as a spectator. The future of high school sports in Iowa is dependent on you.

More growth for me in this category. I played sports throughout high school and played basketball and softball in college. I know way too much about sports and often struggle to keep my mouth shut. When my boys get in the car after a basketball game I just want to say, “Okay, so let’s talk about those free throws,” or some other piece of advice.

I joke that I’m a much better theater mom to my daughter than basketball mom to my sons because I don’t know anything about theater so my words are 100% encouragement. “Yay, you!” “Great job!” “I loved watching you shine on stage.” No stage directions coming from me, because I have no personal knowledge or wisdom to give her.

But even if I did, she doesn’t want that. Neither do my sons. And they don’t need it anyway. They already have a coach. Several of them, in fact. But, they only have one mom.

Which, I think, is the point of the Iowa High School Athletic Association’s letter. A reminder to us adults to be cheerleaders and supporters, not unofficial coaches or officials. If we can do that, it can be a great growth opportunity for our young people – and for us. 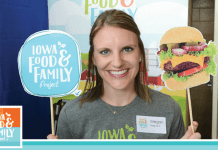