I’ve always been a big football fan. I was a statistician for my high school team. My dad played college football and spent nearly 35 years as a football referee. I know the game and I love the game. There’s just something about high school football under the Friday night lights and a Saturday kicked off with College Game Day that gets me fired up!

But, when it came to letting our oldest son start playing tackle football in third grade we were slow on the draw. As much as we loved football, we couldn’t quite pull the trigger on letting him don a helmet and shoulder pads.

It boiled down to this: what were the risks and could we live with them?

In third grade, the answer was no. It was also no in fourth grade and fifth grade and sixth grade.

Chronic Traumatic Encephalopathy (CTE) was big in the news at that time as NFL players suffered personality changes, depression, and suicide. CTE is a brain condition associated with repeated blows to the head.

Would our nine-year-old get CTE? Probably not. But the concussion-risk on his little tiny brain was a big hurdle for us to get over.

We didn’t give our son the choice at the time. We explained we weren’t comfortable having him play tackle football until he was in seventh grade at the earliest….if then. We pursued flag football options instead.

He was disappointed, and honestly, I was too. I’d dreamed of being a football mom and sharing that experience with my football-loving dad as he watched his grandson play. That dream appeared to be sliding away.

As his friends played year-after-year with little-to-no injuries, we definitely doubted our decision. Should we have let him play? Would he have been injured? Did we overreact?

And in the true nature of youth sports, we also feared that if/when he eventually did play football, would he be “behind”? Would he be able to compete with his peers after a four-year delay in his “career”?

Flash forward to seventh grade and, holding us to our word, our son asked if he could play school football. (And by “asked,” I mean he formulated and presented his case for why we should DEFINITELY let him.)

It felt risky to say yes. We still worried about his developing brain. But, we also knew it was important for him to begin making decisions for himself. That fact, in itself, probably felt riskier than anything at the time. We agreed he could play with one stipulation: if he ever got a concussion, his football playing days would be over.

Giving It a Try

His first season was a roller coaster. He’d never tackled or been tackled before. The equipment was new. The plays were new. He was a rookie thrown in with four-year veterans.

He started off as the third-string quarterback on the seventh grade B team. In his frustrations, he blamed us for being behind developmentally because we hadn’t let him play earlier. There were some rough nights after practice.

But as the season progressed, he got better. He grew more confident and skilled. When it was clear he didn’t have the arm to be a quarterback, he switched to tight end and started catching passes. By the end of his 7th-grade season, he was still on the B team but moved himself up to become a starter on offense.

Each year after, he’s improved. In 8th grade, he was a back-up tight end and safety for the A team. His freshman year he was a starter on the A team and was one of a handful of freshmen asked to continue practicing with the varsity through the playoffs. 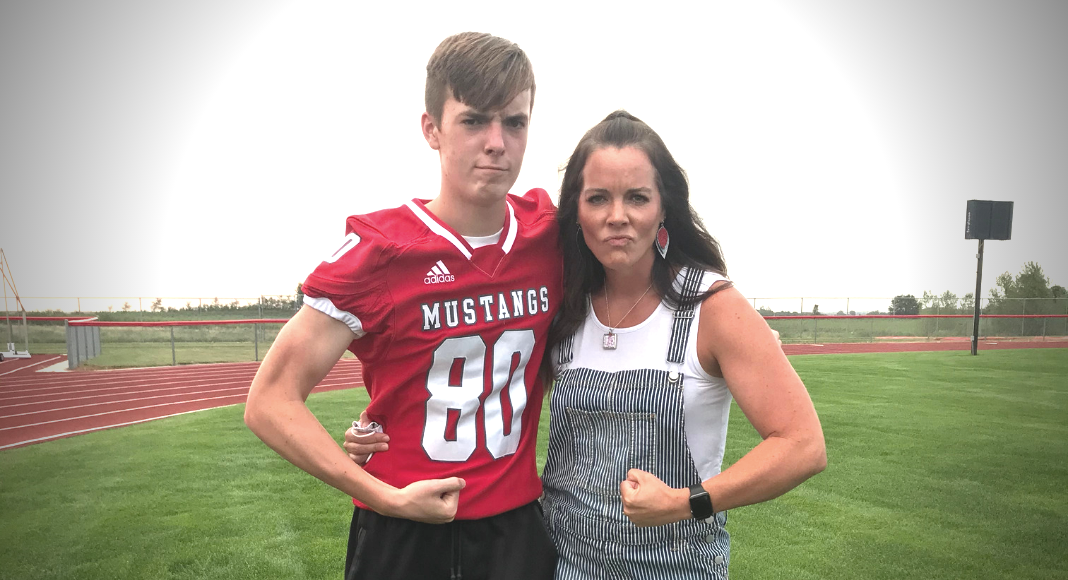 Today he’s a sophomore and in a true, turnaround story, he’s now the varsity starting wide receiver. After sitting out for four years, he’s in his fourth season playing. His skills have caught up and his passion is as strong as ever.

We don’t regret delaying his entrance into tackle football. Even though we feared he’d be behind, his athleticism kept him in the mix until his experience caught up. And not a single concussion to date (knock on wood!).

Of course, it’s easy to say, “no regrets,” now that it’s all worked out for him. But, I believe holding him back gave his body time to grow, his brain time to develop, and his passion time to multiply. He’s not sick of the game yet. In fact, he’s grateful for each and every practice and takes none of it for granted.

I don’t take it for granted either. I love being a football mom and enjoy cheering my son on in something he truly loves to do. But, make no mistake, in between cheers, I pray silent prayers. I think that’s the true lesson of a football (or any) mom: we cheer and pray and trust God for the rest.