Being pregnant definitely has its drawbacks. I’m pretty sure twice during my pregnancy the baby was turned completely sideways. It wasn’t exactly comfortable.

Although I did spend the last few weeks of my pregnancy with bad heartburn and feeling the weight of the baby on my bladder 24/7, I had a relatively easy pregnancy.

It felt long at the time, and I wondered if I would ever not feel bloated again, but the final weeks of my pregnancy flew by, especially since I ended up giving birth 11 days before my due date.

Despite my discomfort, I really enjoyed being pregnant, and I actually kind of miss it. Don’t get me wrong, I love being momma to a smart and sassy 17-month-old, and I don’t miss the cankles, but there’s a part of me that misses the perks of being pregnant. 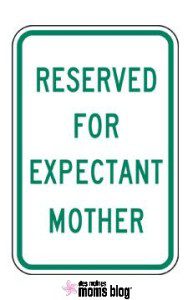 From grocery stores like Hy-Vee to the big-box baby stores, there are several places in town that offer spots for new and expectant mommas. I definitely took advantage of this multiple times. The husband even did, too, when we went out shopping together. It made waddling to the door that much faster, especially during the hot summer months when all I wanted was the A/C on me at all times.

For the most part, I ate healthy throughout my pregnancy and continued to stay active, so I didn’t feel as guilty enjoying the splurges of pizza and ice cream every now and then every week. I may have indulged on sweets on a regular basis. Now, 17 months later, I have no excuse for eating ice cream straight out of the carton other than to get my sugar fix.

The generosity of others.

Even though I did get a couple random comments from complete strangers – one who insisted I was having a boy – I couldn’t believe how kind and thoughtful people were throughout my pregnancy. From opening doors to giving up seats to letting me go first in line at a potluck event (feed the starving pregnant woman!), the kindness was very much appreciated. Not going to lie, I kind of miss the attention.

Seeing the ultrasounds and feeling the baby move.

I’ll never forget the first appointment at the UnityPoint downtown doctor’s office. Seeing the tiny blip that was our child on the screen, hearing the fast woosh woosh woosh of her heartbeat pulsing in our ears. I can still hear it now as I close my eyes and remember that moment, the excitement my husband and I felt as we squeezed each other’s hands. We heard and saw our baby for the first time at about 8 weeks, but I didn’t feel any movement until closer to 18 weeks. For the longest time, I didn’t know what to expect. Would I even know it when it happened? And then it did. Small flutters in my stomach, almost like a butterfly. Once I felt the baby move, it didn’t seem to stop. I loved it, and it’s one of the things I missed right away after giving birth. There was something soothing and special that I felt with each kick and movement, as uncomfortable as it could be feeling a limb in my rib cage. I had a special connection with my baby girl before she was even born, as I loved feeling her tiny body forming and growing inside of me. Even her hiccups in the womb were cute. I didn’t know her gender at the time, but I had a feeling she was a girl. I loved not knowing and creating a special connection with the baby before birth through feeling every movement.

It took my husband and me up until the 20-week ultrasound appointment to decide if we wanted to know the gender of our baby. At that point, we decided we were already enjoying not knowing and why not wait until the baby arrived? It made the pregnancy adventure that much more fun, and the anticipation continued to build as my due date drew near. Even though we both had a feeling it was a girl, everyone seemed convinced I was having a boy based on how I was carrying the baby. (I was all belly. And carrying extremely low. So low I swore it felt like the baby was sitting on my thighs.)

There’s nothing like the anticipation of a baby’s arrival, whether you know the gender or not. Especially as a first-time mom, I didn’t know what to expect, but I was so excited for the adventures that were ahead. I anticipated the best and the worst, but I knew that the joy of meeting my little one and being a mom would outweigh the hormones and sleeplessness that comes postpartum.

And just as my husband and I anticipated, our daughter arrived, beautiful and perfect. There were and still are challenges often daily that come with being parents. But there are also incredible rewards. And while I miss being pregnant and some of the perks that came with it, I love being a momma even more.

Did you like being pregnant? What were your favorite pregnancy perks? Infertility Awareness: Say This, Not That