This post is part of an editorial series, Birth Stories, is brought to you by UnityPoint Health and Des Moines Mom. All 5 original articles from the Birth Stories series can be found here. When I think about the important moments in my life, none of them compare to the birth of my twin boys, Maxwell and Corbin. My husband and I both wanted to be parents as soon as we could, and after watching one of my best friends go through her own infertility/IVF journey I wanted to start immediately. We started trying two months before our wedding.

Exactly a week after our wedding, I took a pregnancy test, and lo and behold, I was pregnant. I was so shocked, I took 4 tests that night to be sure. Each one came back positive.

So began the most traumatic and rewarding journey of my life.

In the following weeks, I had two appointments. The first was where my doctor took a urine sample and confirmed I was indeed pregnant. I remember leaving that appointment with my husband feeling ecstatic. At my next appointment, we had our first ultrasound and we heard a heartbeat and saw a baby, which made it all feel so real.

Our third appointment started just like any other. I laid down on the exam table for the ultrasound with my husband right next to me. We were eager to see how much the baby had changed. Our doctor pulled up the screen and I remember seeing two white circles on the screen. Our doctor said, “Do you see that?” I wasn’t quite sure what she meant so I replied, “Can you tell what it is?” referring to gender. She said, “No, there’s two in there.”

I instantly started shaking and couldn’t believe it. My husband said, “Are you serious?” I’m surprised he didn’t faint.

Our doctor reassured us there were two babies and in our previous ultrasound, we most likely couldn’t see the other baby because it was behind the one we saw. She also informed us that due to the size of the hospital and twins being considered “high risk” we would be needing to switch to a bigger hospital.

We are lucky a larger hospital was only 30 minutes away from where we lived. We had a few appointments at the new hospital. We found out the twins were boys and again, I’ve never seen my husband happier.

I believe it was my third appointment where we learned that the boys were diagnosed with twin-to-twin transfusion syndrome. Twin-to-twin transfusion syndrome, or TTTS, occurs when twins share a placenta and there is unequal blood flow resulting in one baby not getting enough nutrients. I remember hearing this and just not knowing what to think. To be honest, I was still in shock we were having two babies. As a first-time mom, I knew I would do whatever it took to make sure the boys were safe. Due to the TTTS, we were transferred again to a hospital in Des Moines. From there, I was having appointments every other week to monitor Baby A and Baby B’s cord flow. My doctor was amazing and eased all of my worries.

We live about 2 hours away from Des Moines, so I had to take days off for my appointments. As a teacher, it was hard for me to be gone, but I was blessed with an understanding principal and team. During my appointments, the technicians would check their organs and we would look at the cord flow between babies.

It was determined Baby A was going to be the smaller of the two. I also had a bit of pre-eclampsia which we monitored.I don’t remember how many appointments I’d been to up until that point, but the next one changed my life.

My mother-in-law drove down with me this time because she wanted to see the ultrasounds. It started like any other appointment. I was in the ultrasound room and the technician started to look at the boys’ cord flow. Then she got very quiet and left the room. Those next few moments seemed to drag on forever. I knew something had to be wrong.

We met with my doctor like we did after every appointment and she told me my pre-eclampsia was high and that the cord flow to Baby A was not looking good. She said I was going to be admitted immediately.

I instantly started crying. My mother-in-law hopped up right away and hugged me. We made our way to the car and I called my husband and told him he had to get down to Des Moines now.He was confused and worried because I was crying. My mother-in-law took the phone and explained what was going on.  After what seemed like forever, I was checked into my room. A couple of hours later, my husband arrived and we met with one of the neonatologists.

I was 24 weeks and he said with twins, they usually shoot for 35 weeks gestation for them to be born. We also met with one of the other OBGYNs who worked alongside my doctor. He explained that Baby A’s cord flow was starting to lessen. He said in the worst case, it would start to recede and we would have to do an emergency c-section.

I had to stay in the hospital to monitor my blood pressure and the boys’ cord flow with daily ultrasounds. I remember thinking of course whatever is needed. I knew I had to hit that 35-week mark to make sure the boys were going to be okay.

That first week, my husband stayed with me, then to save his days, he only came on the weekends. My angel of a mother stayed with me in the hospital during the week so I wasn’t alone.

The next 3 weeks were hard. I was afraid to move. I didn’t want anything I did to hurt the boys. My mom got me to take a couple of walks around the hospital, but for the most part, I stayed in my bed. My husband built all kinds of model cars and machines while he was there. I couldn’t have anything else bad happen and not moving seemed like the safest option. The days slowly passed. Then came May 21.

It was a Monday and I had a rough day. My mom tried to keep me happy but it was hard.  The nurse had a hard time finding the boys’ heartbeats for their daily monitoring, which didn’t help my blood pressure. Night finally rolled around and the night nurse came in to take my blood pressure and monitor their heartbeats before I went to sleep. She got everything on and was looking at the machine. She commented on Baby A’s heartbeat and said she was going to go check with my doctor who was on call at home.

She came back and said my doctor wanted to monitor it a bit longer to watch Baby A’s heartbeat. Less than 10 minutes later, about 8 nurses came running into my room saying my doctor said we are going to be doing an emergency c-section because Baby A’s heartbeat wasn’t recovering.

My mom instantly got up (she slept with me in the room on a cot) and started crying. The nurses surrounded me and started having me sign papers, take my jewelry off, and prepare me for surgery. It was around 10:30 at night and I was 27 weeks.

The only words I could make out were, “call Justin.”  My mom got the phone and luckily he answered. She tried to explain what was going on and then she handed it off to a nurse. She explained the situation and said, “you need to get here.” He was back home for the week so she said “well when you get here, you’ll be a dad.” I remember being wheeled out and wishing my mom could have come with me. I was freezing in the operating room. My doctor came and reassured me she was going to take care of me. The last thing I remember was the blue sheet going up.

I woke up in a small recovery room. My husband, mom, and a nurse were there with me. I kept telling my husband I didn’t cry and asked how the boys were. He said they were good. We had names already picked out and I let my husband decide who was going to be who. Baby A was going to be Maxwell and Baby B Corbin. Then, I looked over at the marker board on the wall and I saw their weights, 1 pound, 6 ounces and 2 pounds. My heart sank. 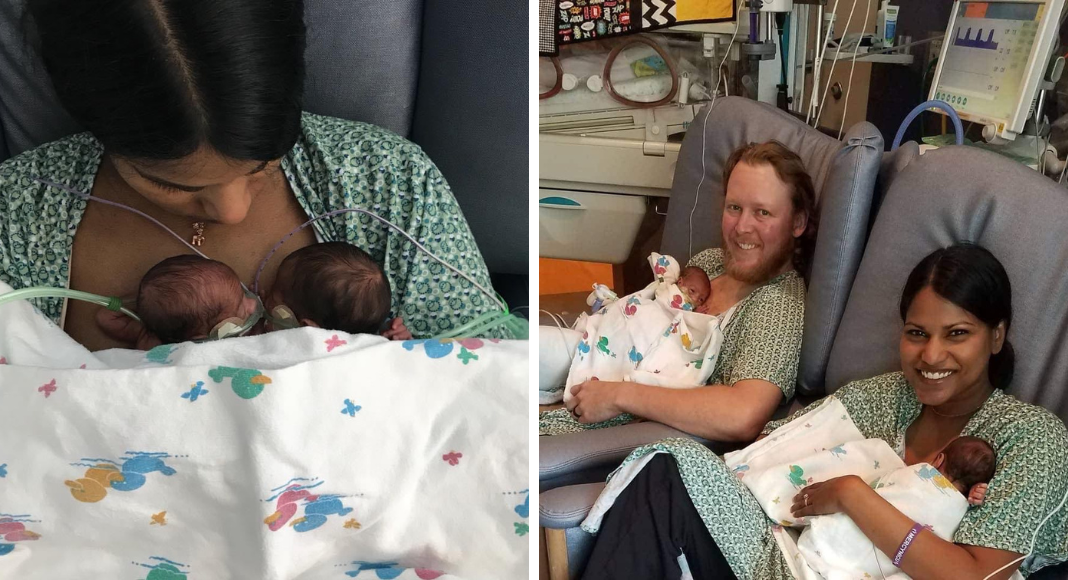 Those next few days I could barely look at them. I felt like such a failure. I was discharged a week after and we set up camp at my husband’s aunt and uncle’s house in Ankeny. After the boys were born, they were placed in the NICU. The care they received was something I will never forget. The nurses loved them like their own. There were daily checkups for oxygen levels, growth, weight, and a bunch of other things I didn’t understand.

I will never forget the day one of the nurses asked me if I was okay. It was the first time I’d been asked that since they were born, and it meant the world to me. Just like when I was in the hospital, my husband stayed the first week and then came on the weekend while my mom stayed during the week.

Corbin (Baby B) was discharged after spending 60 days in the NICU with no oxygen and weighing about 4 pounds He came back and forth all summer long with us while we would go see Maxwell in the NICU. It began to get a bit draining on my mental state. I didn’t think he was ever going to be discharged.

Finally, on Labor Day, Maxwell was discharged after spending 105 days in the NICU. He was still on oxygen and quite a little peanut, but I couldn’t believe the day was finally here. We were going home as a family.

I can’t begin to express the amount of gratitude and love I have for the doctors and nurses who took care of the boys and me. They became family to us. I will never forget any of them. Looking at them now, I’m told you would never know they were born 3 months early. They are my tiny miracles and I truly wonder how I got so lucky to be their mom.