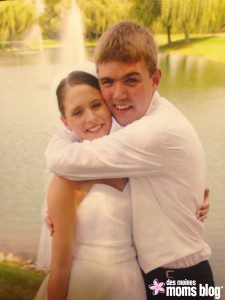 The journey started on the path that I had planned. I was married at 24 years old, and after a few years, started trying for our first of two children — because I like a plan and two children were going to be my family. It took around a year of trying, but Matthew Michael Hoover was born on December 23, 2005.

Since my plan was to have my two children four years apart, when Matthew was around two years old we started trying for our second child. That is when our path became long, dark, curvy, and bumpy. You see, I have been pregnant five times, and Matthew is my only biological child.

The number of miscarriages doesn’t matter. It was four, and I remember each one — where I was, what I was wearing, everything. The heartbreak is the same from having one to many more.

Our second pregnancy ended after we had heard a very strong heartbeat at our 12-week appointment. I remember vividly that I was at a school event (my husband and I are both teachers), and something wasn’t right. I called and the doctor told me that most likely nothing was wrong since we had just been in and the heartbeat was strong and healthy. Something was wrong.

This is where the path got crooked and difficult with a few years of miscarriages and fertility treatments. The doctor told me that we were not his first nor his last couple to tell they had miscarried. I will never forget that day, and I still have so much distaste for how he handled the situation…. It was the hardest day in my life to date, and he had no comfort, compassion, or tact.

From that day, we set our focus back on baby number two. After a second miscarriage just a few months later, we consulted with a fertility clinic. We began many tests and procedures and ultimately ended up starting the in vitro (IVF) process about a year into working with the specialist. In the end, we had three rounds of IVF. One resulted in a pregnancy, which was our third miscarriage. Then somehow we conceived naturally, and this was our fourth miscarriage.

This was the time we started to think, What is this path that we are on? Is there a light? We decided to try one last IVF round and we were setting our hopes high. We had reached the point that we had opted to send our embryo cells to be tested, and out of the five embryo cells that we had sent away, one was a perfect embryo. We knew this was our going to be our baby. It wasn’t. That perfect embryo didn’t implant, and we didn’t even get pregnant.

Throughout this entire process and the many years, I had continued to be a mom to Matthew, to teach children, and to try to be the best wife and friend to others. I had to put on a really great poker face through many of my friends’ pregnancies — it was hard. I was very happy for all my friends, but each pregnancy that was announced, even on Facebook, was devastating; and the “congratulations” on the outside was tears on the inside until I was alone and could cry. It was hard for me to be around babies, but for some reason older kids I was okay with. It was hard for me to listen to pregnant woman complain about being pregnant, even though I had been there and understood the discomfort. It made me angry that they would complain about pain and discomfort that I would have given anything to feel. Those years were so emotionally draining. To be honest, many of the memories I have pushed away and can’t remember, or don’t want to remember — I am not sure which.

I remember thinking, Why me? I help so many people with their children, so why can’t I have another to love and cherish? I am such a planner and type A personality, so when the doctor and pharmacist told me to take my shots at 9:00 p.m., I took them at 9:00 p.m., not 8:58 or 9:04. The nightly icing of my permanent marker “X-ed” hip for my husband to administer the one shot that I couldn’t give myself was a routine that we fell into. A lot of nights he would miss the spot and I would bleed, but I didn’t care.

I could go on, but those days are now very blurred. What I do remember very clearly was the note Matthew wrote for church asking for a brother or sister since he didn’t have one and everyone else did. This was the reason we didn’t give up.

Did our journey end with a biological baby? No. It didn’t. We were not on that side of the statistics. However, our family is complete as a family of four. Cecilia Ruo Xi Anne Hoover entered our lives on December 8, 2014, when we met her for the first time in Nanjing, China.

Do I still think about all my babies that I carried for as long as I could? Yes, daily. But I do know, for our family, we couldn’t continue the path that we were on. We needed to create our light, and that was in the form of adoption. I share my journey and path with anyone who is interested because, as my husband has put it, “Our journey has not been easy, but it has been wonderful.” Cecilia and Matthew are the greatest things to ever happen to my husband and me.

You can read more about our adventures on our blog, Three Plus C. I am a mother of two: Matthew (9) and Cecilia (1). I have been married to Nic for nearly 12 years. I am in my 13th year as a special education teacher at Jordan Creek Elementary School in West Des Moines, and love it! I grew up in West Des Moines and currently live with my family in Urbandale, Iowa. I am a 2001 graduate of the University of Northern Iowa and received my masters in 2007, also from UNI. I enjoy spending time with friends and family, whether it be jogging, having dinner out, or catching a movie.