We talk about organizing often here at Des Moines Moms Blog. Lets face it… we’re all moms and that comes with the territory!

Angela has shared How to Tame the Toy Beast (specifically, girl toys and LEGOs) and How To Organize the Paper Trail. Sarah has even shared a Thirty-one Gifts giveaway to encourage us to organize our spaces.

Since those early posts, we have had a few readers ask us to write on home organization; and although I have never claimed to be Martha Stewart, I am one of those super weird people who LOVES to organize. LOVE IT. I was thinking this would be a great topic with the holidays fast approaching, as that is when things usually get out of hand in all our homes due to gifts, spoiled children, company, busy schedules, etc. So, from a formerly borderline (but currently less) OCD person, let’s get down to it….

I’m talking directly to you hoarders and moms who keep every single thing. I almost nightly go through preschool crafts, toddler/baby masterpieces and throw them away. That sounds horrible, but honestly… what on earth am I supposed to do with it? Sure I will frame some down the road for their playroom; sometimes I throw it up on the refrigerator, and sometimes I put it in the memories box I have for each of them. But more then likely, when my 3-year-old hands me 27 pieces of paper with scribbles beautiful art on it, after reassuring her it’s the most beautiful picture I have ever seen, I recycle it.

With amazing resources like swap pages, Craigslist, eBay, etc., there is someone out there who will pay money for your things. If you have some nice clothing, coats, or shoes that you want to get rid of, try selling them. If they don’t sell donate like we talked about above. Are there things that have been sitting in your basement just taking up space that you don’t think you will need? Sell them. Especially as the holidays are approaching, this is such a good time to go through bins, closets, toys, etc., to get rid of stuff you don’t NEED and make room for gifts that will soon be arriving. Another great opportunity is selling through one of the many awesome consignment sales that come through Des Moines, such as Kids Closet Connection or Just Between Friends Des Moines. Or, places like Me N’ Mommy To Be are a great option, as well.

ONLY PUT OUT TOYS THEY WILL USE…. I don’t know about your kids, but mine would rather play with a roll of toilet paper, bubble wrap, or a water bottle instead of their toys; so I have only a few bins of toys for them in the living room where we spend most of our time. I use mostly Thirty-One Gifts bins because… well, they are cute and awesome and our very own team members Sarah Farnsworth and Rachel Verzani sell them and it’s easy!! I always think it’s nice when the living room is somewhere you can live in instead of feeling like you are in Barbie’s Dream House or Lego Land. And pink doesn’t really match my décor, so Barbie goes in the playroom. 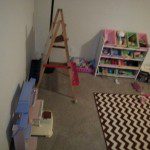 Use the playroom for what it is, but also make it a place that the whole family can hang out. This is the place I will allow to get a little crazy in the toy department because that’s what it’s for, but I still maintain an organized chaos. I love having a couch in the playroom just in case one wants to cuddle while the others play basketball, do puzzles, or wrestle play nicely. It’s time to let go of control issues, fear issues, hoarder issues, and move on and have a home you can enjoy and rest in.

There are several companies in the area that can help you get organized. Here are a few:

Simply Organized – I worked for them one summer, and it was my favorite job I ever had. (Told you I was weird.)

Also, if you’re in need of IKEA furnishings to help get organized but don’t have time or energy to get to Minneapolis or Chicago, check into WeDeliverOmaha. It is an awesome team out of Omaha that make trips to IKEA for you. Yep – you place your order with IKEA and they deliver. As long as you’re within their travel route to IKEA, consider your IKEA dream furnishings within reach! They deliver to Des Moines, and their next delivery is Thursday, November 7th.

What are some ways you stay somewhat organized with kids?