I think I’m failing as a parent.

Okay—maybe not in an all-around way, but in this one area I seem to be falling miserably short.

My kids despise chores. Is that too strong of a word? Well, anyway, they certainly don’t love them. And instead of the happy heart and willing attitude I expect when I ask for help, I get shoulders dropping to the floor, feet dragging, and voices whining. 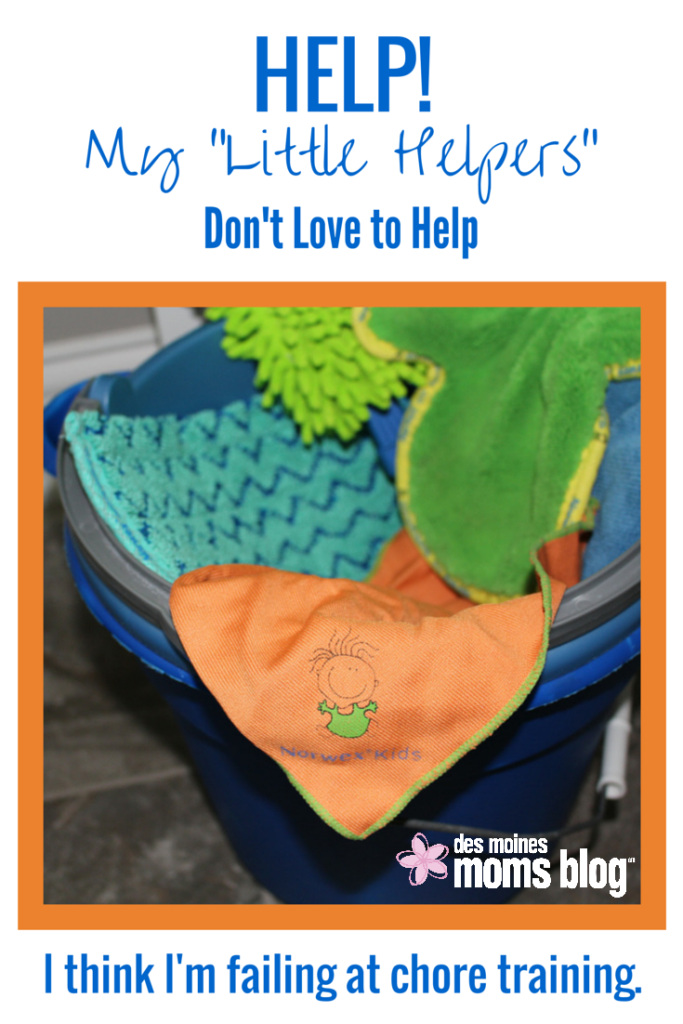 I’m kind of embarrassed to admit that. I think I’m raising pretty nice kids, really. They’re generally kind and obedient and fun to be with. Respectful of others. So I guess I’m not doing everything wrong, but this anti-chore attitude is definitely concerning.

Gosh, I guess it’s been a year already since I initially set this goal: my kids were going to start learning to do chores. Yeah, I’ve always expected the normal, basic things—pick up your toys, clean your room, take your plate to the sink—but last spring I had this vision of me taking time and effort to teach the kids some household chores. It was going to be hard for a while, I knew, but so worth the investment once I had developed my “team.”

It lasted for a while. I taught Elliana how to wipe the table clean. I taught Abel how to sweep and mop. I taught Amariah how to wash dishes. And I taught Isabel how to fold laundry. The idea was that once they had each mastered their chore, we would rotate or add in something new.

I don’t know what happened. Life? But the chore training died somewhere mid-second rotation. So now here I am a year later, without a “team,” and totally disappointed in myself for doing my family this injustice.

I mean, this has been a problem for a while. But it really struck me again last week. I had happily announced to the kids that we were going to have a fun, family cleaning day—work really hard, all of us together, and get a lot done around the house. (And truly, I was excited about this. The inspiration had hit, you know?) Of course, the groaning and complaining ensued. They apparently had some grandiose plans of their own, and mine were interfering.

And then a neighbor kid came ringing the doorbell, and I told the kids they’d have to say no to playing because they had some chores to do.

But we don’t do chores!

And it struck me. No—you don’t. And that’s my fault.

Here’s more truth: I’m drowning in laundry, I could probably count on one hand the number of times I’ve vacuumed in the last six months (cringe)… I need a little help around here!

For one thing, I need some new systems. Whatever laundry and housecleaning schedule was working so well for me when the kids were little and still napping is so six years ago—life looks different now, and I need to find a housekeeping routine that fits. And for the other thing, the bigger the kids get, the bigger the workload gets; and I just can’t seem to do it all anymore.

Nor should I. I have four little helpers who need to learn and experience chores—not because Mommy is tired and failing to get it all done, but because these are important life skills that are best learned now while they’re still young.

I know I need to do this, but I’m not entirely sure what my next step should be. My previous method—giving each of them one chore to master at a time—worked while it lasted. But how do I stay in it? How do I make it a part of everyday life? And how does it move from dutiful completion of a chore on a list to natural, non-scripted helpfulness?

With four kids, a few thousand square feet, and failure to have carried this chore thing out sooner, I’m overwhelmed. I don’t know where to start or how not to quit. Will you help me today? I need some ideas.

What approach to chore training and execution has worked in your house, and how have you seen the realization of your expectations play out?