This article is sponsored by Goldfish Swim School Urbandale. All opinions are my own.

I always thought the purpose of swimming lessons was to teach my children how to swim so they wouldn’t drown. But when we started swimming lessons at Goldfish Swim School Urbandale, it became so much more than that.

In the past, we’ve done a couple of weeks here and there in the summer of swimming lessons. Nothing too intense, nothing too serious. Just enough lessons to make sure my two kids don’t end up as thirty-year-olds who can’t tread water. I have friends who live in warmer parts of the country who are part of “swim communities” meaning that they take swimming very seriously. Their kids compete in neighborhood swim teams and spend hours a day in the pool.

Not us. Aside from recreational swimming at grandparents and some splashing in nearby pools, our lives are largely devoid of swimming for the majority of the year. Imagine my surprise when my oldest child, Lucan, started passing level after level at Goldfish Swim School week after week. He quickly started learning more challenging skills, like the butterfly and how to do flip turns. Until finally, we were at the very last class level and his swim instructor started asking me how I felt about the next step: Goldfish Swim Team – Swim Force.

Students who progress through Pro Level swim classes at Goldfish receive a unique opportunity to join Swim Force. This fun and friendly competition experience provides children with the motivation they need to continually improve their swim skills at a higher level. During the hour -long class, In-water coaches help more advanced swimmers between the ages of 5 and 12 improve their proficiency in the four major strokes: Freestyle, Breaststroke, Backstroke, and Butterfly. Students also learn exciting racing skills like turns and finishes. Swim Force is great for many reasons:

So while you might consider sending your younger child to Goldfish Swim School so they can learn to swim, you ultimately might be surprised when your older child wants to explore competitive swimming because of the skills they learned there!

Goldfish Swim School Urbandale offers classes for all skill levels for all children – whether that looks like a child who is learning to feel comfortable in the water or a child who wants to participate in the sport of swimming. Their goal is to ensure your child makes continual progress through their program! If you are interested in learning more, call to schedule a free trial swim lesson and make sure to mention Des Moines Mom! 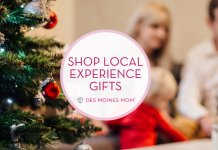 Mercedies - January 21, 2021 0
We have the most exciting news to share with you- Galentine’s Boxes are now ON SALE! We have partnered with some incredible Des Moines companies,...

Where to Go Sledding in Des Moines Area