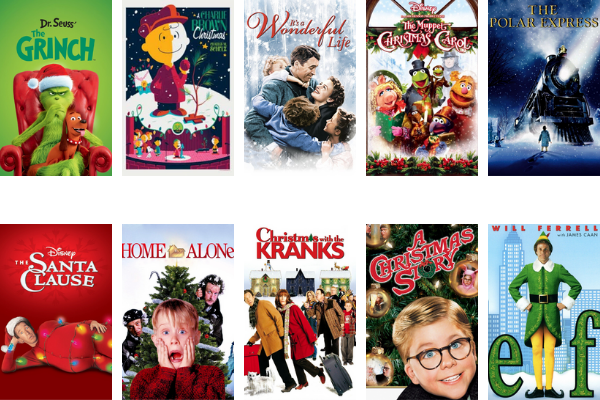 When the weather outside is frightful, a movie sounds so delightful! From animated to comedy to classic, check this list twice for our top, family-friendly holiday movies. And when it’s mom’s turn to choose the movie, we have a soft spot for the Hallmark Channel this time of year.

Every kid loves animated movies. If you just can’t watch Frozen or Moana one more time, shelve them for the holidays and bring out these faves instead.

A Charlie Brown Christmas (1965) In the first tv special based on the beloved comic strip by Charles M. Schulz, the Peanuts gang searches for the true meaning of Christmas. There’s energetic dancing, a pathetic, sapling Christmas tree and a poignant final moment with Linus (and his blanket) you won’t want to miss.

Dr. Seuss’ The Grinch (2018) Pharrell Williams narrates this updated and expanded version of the classic Dr. Seuss story. The Grinch and his loyal dog, Max, seek to steal Christmas from Whoville only to discover that Christmas can’t be stolen.

Frosty The Snow Man (1969) Nobody complains about Karen in this movie! She saves the day and her friend, Frosty, from melting after a discarded, magic top hat makes him come to life. Jimmy Durante’s classic song has never sounded (or looked) sweeter.

The Polar Express (2004) An animated Tom Hanks stars in this beautiful film based on the beloved children’s book by Chris Van Allsburg. Put on your jammies, grab your hot chocolate, and climb aboard for a magical adventure sure to make you believe. A family who laughs together, stays together and these funnies will have egg nog shooting right out your nose!

A Christmas Story (1983) This beloved holiday movie follows Ralphie Parker through the month of December, complete with bullies, daydreams of heroism, avoidance of his cranky “old man,” and hopes for his ideal Christmas gift – a Red Ryder air rifle. I triple dog dare you not to love this movie!

Christmas with the Kranks (2004) The adult in you will 100% understand the Kranks’ desire to skip Christmas altogether in favor of a Caribbean cruise. But, the kid in you will root against them. Their panic about throwing a Christmas party in less than 12 hours will have you laughing all the way.

Elf (2003) After discovering he’s actually a human, Buddy the Elf makes his way to New York City in search of his biological father. Will Ferrell is at his sweetest and funniest as he spreads Christmas cheer by “singing loud for all to hear.” This movie is sure to have you smiling and “smiling’s my favorite.”

Home Alone (1990) You might be a “filthy animal,” but your opinion of your parenting will rise when you realize you’ve never taken a family trip to Paris and left your eight year-old kid at home alone. Kevin McCallister (Macaulay Culkin) enjoys having the house to himself until robbers, the Wet Bandits (Joe Pesci, Daniel Stern), show up. Kevin defends the family home. This was the highest-grossing movie in all of 1990.

The Santa Clause (1994) Tim Allen is at his comedic best as a divorced dad who unexpectedly, based on a technicality, finds himself as Santa Claus. His inexplainable beard, rosy cheeks, and partiality for sugar cookies will have your belly shaking like a bowl full of jelly.

There are a few movies that stand the test of time and where it just doesn’t feel like it’s Christmas until we’ve seen them.

A Christmas Carol (1984) This British-American, made-for-tv film adaptation of Charles Dickens’ famous 1843 book. It is heralded as the best Christmas Carol version. If you’re looking for something more recent, check out Disney’s 2009 animated version with Jim Carrey.

The Muppet Christmas Carol (1992) The Muppet version of Dickens’ classic will have you longing for Christmas past. Kermit plays Bob Cratchit and many of your favorite Muppets make appearances. Scrooge (played by Michael Caine) receives visits from three spirits over the course of one night. You’ll join with Tiny Tim in saying, “Merry Christmas, every one!”

It’s A Wonderful Life (1946) With the help of his trusty angel-in-training, Clarence, George Bailey gets to experience what the world would be like if he hadn’t been born. Jimmy Stewart and Donna Reed shine in this beloved tale of friendship. Get ready to pull out your tissues.

Miracle on 34th Street (1947) Kris Kringle fills in as Santa in the Macy’s Thanksgiving Day parade only to then claim he’s the actual Santa Claus. This leads to a court case to determine his sanity and a friendship with the Macy’s manager’s daughter (and Santa doubter), Susan. This feel-good film will remind you that “Christmas isn’t just a day, it’s a frame of mind.”

White Christmas (1954) Nothing says Christmas like Bing Crosby crooning “White Christmas”. This film has that along with Danny Kaye, Rosemary Clooney and Vera Ellen. Irving Berlin wrote all the music which ensures each watching will be “merry and bright.”

What are your favorite family Holiday movies? 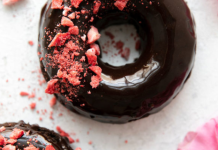 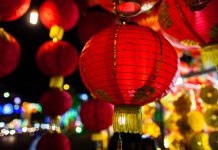 Friday Funday has been delighting young theatre-goers for more than 40 years! The shows are often a first theatre experience for 4- to 6-year-olds,...

Things to do in Des Moines in February 2023

ABOUT US
Des Moines Mom is a locally-focused parenting resource for moms and families. Passionate about parenting and our community, Des Moines Mom strives to connect area moms to relevant resources, local businesses, can’t-miss happenings, and most of all — each other!
FOLLOW US
© Des Moines Mom © - 2023
Sister Site at City Mom Collective.