I love my mom, but in 2009 she bought my children the worst gift ever: Elf on the Shelf.

Her intentions were good. I believe she truly thought it was an excellent gift for her grandkids. But, when she decided to purchase the signed book, music CD, and elf doll, she inadvertently created a veritable nightmare for me that exists from Thanksgiving through Christmas ever since.

I hadn’t even heard of the Elf on the Shelf before we received the blessed gift. Once we read the book, and my then-four-year old son named that blasted elf, Fred, we were one of “those” families. An elf family.

My oldest was hooked on the idea of having his very own personal elf who could listen to his every Christmas wish and report back to Santa himself each night. He looked forward to finding Fred in a new spot every morning. He told Fred what he wanted for Christmas. He loved Fred. He passed that love on to his little brother.

Okay, that sounds all cute and everything, because Heaven knows the fact that Santa is watching them constantly to make sure they are on the “good list” isn’t enough, we have to have a creepy elf IN OUR HOME watching their every move. (I mean, have you heard the song???)

I put on a brave face for my kids, but to others I haven’t been shy about the fact I don’t like the elf.

Not only is the doll creepy, but I am responsible for moving this thing each night??? And I only move it. I am not even one of those moms who goes to all the trouble to make their elves do fun things! After the fifth time, of simply moving the blankly-staring doll, I run out of good ideas about where to put him…lame, I know!

Can I just make an aside here? Who in the world are these moms who make their elves create messes or do naughty things? I cannot fathom this. I apologize if you are that mom, I just don’t relate to you on any level on this one. Cleaning up a mess that I made myself…on purpose? And giving my kids a “funny” example about what not to do from an elf who’s supposed to be watching and reporting their every move? I don’t get it. I just don’t get it.

It has been a little bit better now that my oldest found out about Santa, and he’s in on it with me. I tried to give him the job of moving the elf each night…but he is not all that reliable.

You see, after the Mishap of 2011 when Fred didn’t move for, like five days, we had to email the North Pole. Thankfully, the Elf on the Shelf people emailed us back quickly and told us in order to get Fred’s magic back, we needed to put a circle of cinnamon around Fred. If we do that, he should be back to normal that very night.

Whew, crisis averted (and another mess for me to clean up!)

I couldn’t have him “lose his magic” ever again. Now I set an alarm on my phone each night to remember to move the elf.

This year, we had a house fire and Fred didn’t make it. I thought it might be a great time to tell my youngest about Fred and quit this tradition in our house. Alas, one morning before school, Elliott drew this: 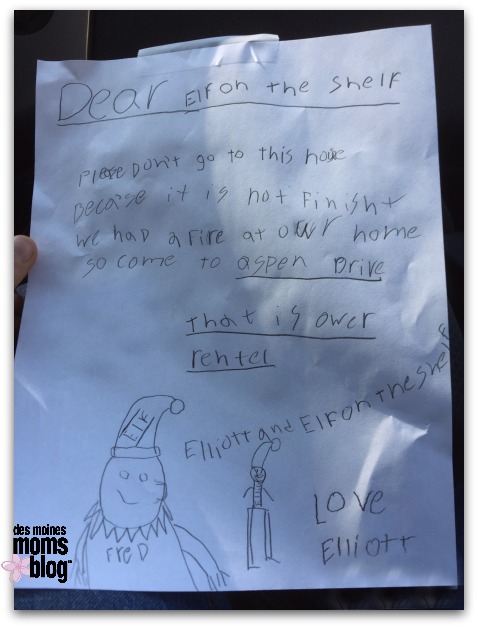 My oldest sent it to me via text and told me we could not quit Fred this year. After seeing the drawing, I agreed.

When I went to purchase a new Elf on the Shelf, I found he has been “upgraded” a bit to look a little less creepy (still creepy). I knew instantly the new style wouldn’t do. I looked online, and found a few “vintage circa 2009 elves,” but I have a hard time trusting what I see will be what I get.

I got a lot of suggestions on what to do, there were even people willing to send an elf from far away. Fortunately, a co-worker had an extra elf from when she couldn’t find hers in time, due to a move. So she gave me her extra elf as a replacement for Fred. (Thanks again, Gretchen!)

And, I have to admit, getting a replacement was worth it. My son has been talking about Fred coming ever since he wrote the note. The excitement he has when he talks about the elf is pretty darn adorable.

Today, when he saw “Fred” for the first time, his eyes lit up and he beamed so brightly, I almost forgot about how much I despise the blasted little thing.

Now, in approximately five days, I will probably go back to grumbling and complaining about the Elf on the Shelf. I most likely won’t be sorry when pulling Fred out of storage after Thanksgiving is a thing of the past. But for now, I will try and cherish the innocence and Christmas magic he brings to our house.

Are you an elf family?