Disney’s THE LION KING returns to the Des Moines Civic Center April 28-May 17, 2015, for three weeks only!

Tickets are on sale now, but you can try your hand at winning a family 4-pack of tickets via our giveaway below.

About THE LION KING Experience the phenomenon of Disney’s THE LION KING.

Marvel at the breathtaking spectacle of animals brought to life by award-winning director Julie Taymor, whose visual images for this show you’ll remember forever. Thrill to the pulsating rhythms of the African Pridelands and an unforgettable score including Elton John and Tim Rice’s Oscar®-winning songs “Can You Feel The Love Tonight” and “Circle of Life.” Let your imagination run wild at the Tony® Award-winning Broadway sensation Newsweek calls “a landmark event in entertainment.”

Presented by Des Moines Performing Arts as part of the Willis Broadway Series.

Tickets for Disney’s THE LION KING are available at DesMoinesPerformingArts.org, by calling 800-745-3000, at the Civic Center Ticket Office (221 Walnut, Downtown Des Moines), or at Ticketmaster Locations. Tuesday, Wednesday, Thursday, and Sunday evenings have the best available seating. No purchase necessary. One winner will be chosen at random from the entries received in the 7-day contest. Tickets will be issued for the Thursday, April 30, 2015, performance only. Resale of prize tickets is prohibited. 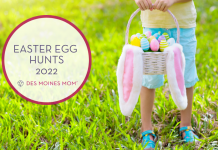 Bloom: A Virtual Event for New and Expecting Moms Recap