On  August 1, 2009 a 7lb 6oz baby boy made his grand entrance into this world, surprising his parents by arriving 2 weeks early. His birth and delivery was uneventful and much easier than his first time mother expected. While this new mother sat getting acquainted with her new baby, her labor nurse came over and told her “I don’t want to scare you, but your son was born with a true knot in his umbilical cord. It is uncommon and he is a lucky boy.” (A true knot is very serious and often times deadly to a baby.)

That baby boy was my Drake .

And that Momma was me. 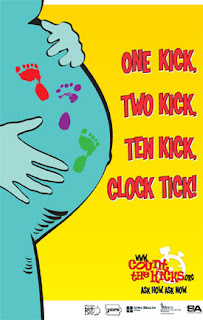 After I had my 1st son, I became connected through a series of events (some might even call it fate) to a woman who’s daughter was stillborn due to a true knot in her cord. In the weeks that followed, this woman invited me to meet with her and 4 other amazing and strong women. These women came from all walks of life and all had different stories to tell, but are connected by the fact that each one of them lost a daughter to late- term stillbirth or infant death. These remarkable women banded together and pledged to make a difference and decrease the stillbirth and infant death rate. Through their conversations and shared passion they founded the organization Healthy Birth Day and the Count the Kicks Campaign.

Count the Kicks encourages expectant mothers in their 3rd trimester of pregnancy to monitor fetal movement. A significant decrease in fetal movement could indicate a problem with the baby. Count the Kicks gives women ideas on how to get the baby moving, should a decrease in activity be noticed, and advises women when to alert the doctor if movement does not increase.

Our little man was due December 23rd 2012 and everything was going beautifully until one fateful Thursday afternoon on October 18th when I noticed a lack of movement in my belly. I drank juice, laid on my side, and waited…and waited…and waited until panic set it. The doctor on call told me to head to the hospital for monitoring and there we found a limp baby. The next morning after a second ultrasound and an unimpressive fetal heart rate I was thrown into a wheel chair and put to sleep to get the little one out as quickly as possible. I was told that our little Cooper James would not have made it through the day had I not been counting kicks and paying attention to his movement. I praise God every day for this initiative and being in tune with my baby before even meeting him

Please help me spread the word about this life-saving campaign. If you know somebody who is expecting send them the link to the Count the Kicks website. The more people who know about this campaign the more babies that will be saved.