Christmas is the happiest time of the year. Except when it isn’t. You’ve got flaky family members who can’t decide when they’re going to celebrate, an ever-expanding list of people to buy presents for, a credit card bill that rivals Greece’s spending deficit, a baking to-do list a mile long, and four holiday parties to attend on the same weekend. It’s stressful and enough to make me want to shut my holly-bedecked doors and say NEVER AGAIN. 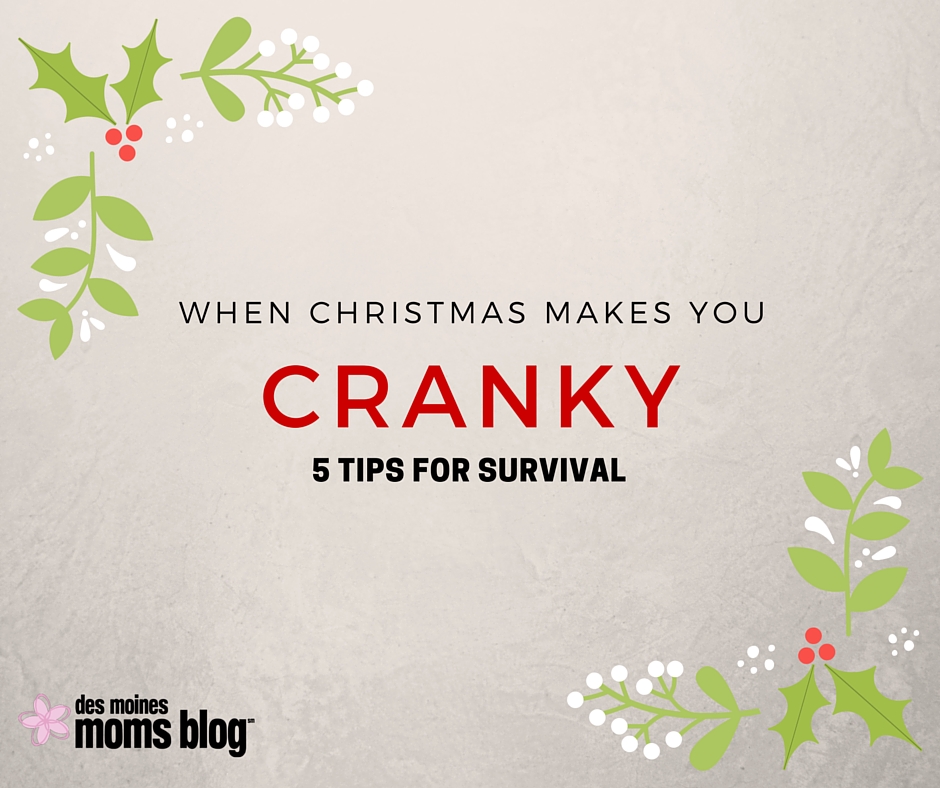 How do you not lose your mind this Christmas? Here are five tips to survive Christmas crankiness:

Last year I had a three-week-old and a three-year-old when Christmas rolled around. We spent five days around Christmas making multiple trips between our parents’ houses having mini-celebrations with extended family members. Every nap and bedtime was at a different house. By the time Christmas was over everyone was exhausted and DONE with celebrating. I vowed this year would be different, so when October rolled around I told everyone that we would be spending Christmas Eve and Christmas Day at our house and starting our own traditions. We would attend Christmas Eve service at our own church and would dream of sugarplums in our own beds. My husband and I went round and round about how our families would feel once we announced that we would not be traveling on Christmas. And the truth, some were upset with us. But most were accommodating and understanding. If you are looking to have a similar conversation, I suggest having it sooner rather than later. We will spend the weekend before and the weekend after Christmas celebrating with our families.

2. Re-frame your shopping list of people to buy presents for only the essentials.

For example, last year I bought gift cards for my son’s two main teachers at his preschool and brought in homemade cinnamon rolls for the rest of the floaters, helpers, etc. See if some of your extended family would be comfortable with doing a kids name exchange rather than buying gifts for each person. Do a white elephant gift exchange for the adults.

3. Start saving for Christmas in January.

My husband is the budget master. I’m the budget breaker. A couple years ago Lance decided we needed a line item for Christmas presents and started putting away $60 per month. While it doesn’t always cover ALL the expense for presents, it certainly softens the overall blow and doesn’t leave me eyeing which of my kids’ toys I can return for cash.

True confession: one year I used 24 pounds of butter during my Christmas baking. I grew up in a household where my mom made dozens upon dozens of Christmas goodies. As an adult, it was my job to carry on these baking traditions. No Christmas was complete until I had spent countless hours in the kitchen. No need to mention that same year, we still had Christmas cookies in the freezer seven months later. Now that I have two littles, I’m trying to dial down the crazy. Christmas will still come if I only bake two kinds of cookies. And everyone’s waistline will thank me.

5. Which leads to my number one piece of advice: give yourself permission to say no.

When you say yes to that third holiday party, you are also saying yes to another late night and another missed bedtime. My mom always told me, “When you say yes to something, you are also saying no to something else.” No one is having a merry Christmas when people are over-tired and worn out from going place to place. Build in time to re-energize, and you’ll find yourself actually able to relax and enjoy life.

Here’s to putting the “happy” back into “happy holidays” — good luck this year!