This article is sponsored by Polk County Conservation. Des Moines is about to get even cooler than it already is with the opening of the Lauridsen Skatepark set for May 22, 2021. 1. What makes this skate park special?

The Lauridsen Skatepark is an 88,000 square feet attraction showcasing Olympic caliber park and street courses. It will be the largest open park in the country. The skate park  is located on the north end of the Principal Riverwalk next to the Des Moines River. Features include a promenade, flow bowl, amoeba pool, snake run, and a skateable art piece entitled WOW.

Philanthropists Nix and Virginia Lauridsen donated $1.6 million to build the park. Other donors include leaders in the Community Foundation of Greater Des Moines, the state’s Community Attractions and Tourism program, and many other private donors.

3. What events will be at the skate park?

Expect to see major events hosted at the park, especially with skateboarding being added as a new sport in the Summer Olympics in Tokyo later this summer.

Adventure Sports Network Group is having its annual summer Dew Tour skateboard competition and festival in Des Moines, May 20-23, 2021, at the Lauridsen Skatepark. It will include World Skate sanctioned men’s and women’s skateboarding Street and Park competitions, making it the only U.S.-based global Olympic skateboard qualifying events for 2021.

The event will feature more than 300 of the world’s top male and female skateboarders competing for a chance to win the Dew Tour title and earn points toward the Olympic skateboarding team. 13 Family TV Shows to Enjoy Together 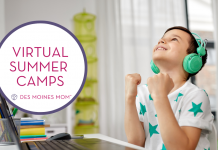 Water Safety Tips Could Save a Life

Des Moines Mom - May 6, 2021 0
May is National Water Safety Awareness Month. As we head to pool and beach season, it’s the perfect time for all families and caregivers...

5 Things to Know About the Lauridsen Skatepark in Des Moines